I’ve been reading up on a local brewery and how they’re swingin’ for the fence, in classic West Coast, Can-Do attitude. Stone Brewing’s storming the castles of the beer-vana that is Europe, reminding me of the formidable challenge faced by new brand leaders when breaking into traditional distribution channels.

California wine makers hit it over the fence ages ago … why not beer? 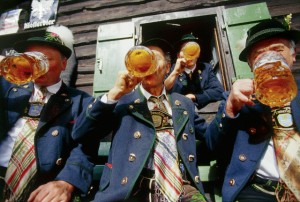 Stone Brewing is taking the phrase ‘audacity of hope’ to new levels. A popular US brewer of craft beer, they’re searching for a location for their European brewing center… in Belgium. Or maybe Germany. As they expand into Europe, how can Stone Brewing vault past a formidable wholesale distribution channel, not to mention nationalistic pride?

Responding to a demand for West Coast craft brews, the Escondido, California company realizes that their brew’s unique, sharp tones and flavors take a hit as it’s transported from California to brasseries and tavernas throughout Europe. Hence, the decision to brew in the local markets. Makes sense. But how will the distribution machine take to the new foreign kid on the block?

Yes, Stone Brewing is focusing on Germany and Belgium… talk about moxy! But, armed with the brand cachet of a California pedigree, Stone Brewing can continue to win over fans among European craft beer lovers. These consumers congregate in the same drinking spots, making a concerted effort to “drink differently” despite traditional bias against American beers. There is such cross-border migration now among EU citizenry that fervent devotion to local brews is diminishing somewhat (barring the German and Belgian turf) This creates a Marketing Frontier opportunity.

Successful brand building for alternative products in a well-established industry takes place in such marketing frontiers, where word-of-mouth and sell-through both pick up momentum. As products win approval by the social mavens, these “buzzy” consumers pass endorsements quickly and earnestly throughout their social circle. It’s much the same as when makers of natural and organic consumer packaged goods attract health-conscious shoppers at natural foods retailers. Alternative retail is most often a less-expensive channel, too: cash-strapped startups welcome these retailers’ low or non-existent slotting fees.

So – Stone Brewing can get it right by finding the right mix of brave new customers, follow their social migration paths, keep an eye on the most tragically hip watering holes in each key EU city, and build a channel marketing plan of sponsorships and social marketing to pique interest. Keeping their brews pouring and the brand name relevant will create sustainable sell-through and enough groundswell demand by “retailers” to make the EU’s behemoth beverage distribution machine look their way.

Stone Brewing’s story is a great channel leadership challenge, and another really great story out of southern California. It’s about the basics in brand marketing, too: know your brand traits. Define your most-favored consumer class. Set up most direct channels to reach them… which in some cases, may mean non-traditional. Be audacious!