Global exporters eye India covetously: its 1 billion-strong population signals broad growth for consumer goods and services. And, it continues to attract professional services outsourcing. The country is a magnet. But all that is contingent on a balanced, multi-modal plan that transports the populace freely throughout the nation, and that moves raw materials and manufactured goods along the supply chain. 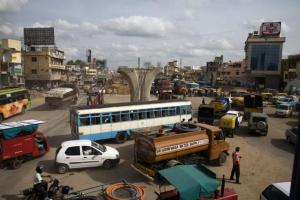 Someday the GQ Highway will rise above the traffic jams of Bangalore (Photo by Ed Kashi for National Geographic).

McKinsey & Co. conducted a study for the government of India, in which it reports that losses due to inefficiency in logistics infrastructure nationwide could triple to $140 billion annually in the next one decade (up from $45 billion in 2007), if increased usage of rail and optimal utilization of waterways is not achieved.

Though Kinsey based its conclusions upon a detailed analysis of a flow of three main commodities — coal, auto components and agricultural goods – of equal importance is efficient movement of India’s citizenry via mass transit. Not surprisingly, McKinsey emphasizes increased usage of rail and waterways in India, vs. burdening the road network.

India, with its billion-plus population and high-density living, needs scalable, clean transport infrastructure to realize its role as future power in world commerce. Therefore, I see the country as top choice for export expansion for providers of goods and services that improve how people move and live: engineering, construction, architecture, and all related goods and services.